From Ancient Graffiti to Modern Street Art: Our Need for Self Expression Through Time

In Pompei, graffiti on the walls often depict popular gladiators, such as these two thraeces, M. Attilius and L. Raecius Felix.

Graffiti is often the scourge of local law enforcement, but when found in an ancient town or city we view it as a valuable tool for learning about the culture, language and pastimes of the inhabitants.  Preserved ancient graffiti gives us a peak at daily life hundreds of years ago and demonstrates the basic need for human expression.  Like it or not, modern graffiti is probably here to stay for those same reasons.

In a Roman Market in Athens, we see Christians of the 6th and 7th century BCE expressing their new religion with symbols, a game board gives us evidence of men gathering in public squares for friendly competition and topoi inscriptions tell us which merchants sold their goods from that spot.    Figural drawings from the same market show how common sexual graffiti was in Roman culture.  [“Some Inscribed Graffiti in the Roman Market in Athens,” Michael Hoff, Zeitschrift für Papyrologie und Epigraphik , Bd. 155, (2006), pp. 176-182, http://www.jstor.org/stable/20191037 ].   Nabataean graffiti from ancient Sinai and Aramaic graffiti in Egypt come in the form of prayers for those who have passed away. [“Graffiti and Dedications,” Joseph Naveh, Bulletin of the American Schools of Oriental Research , No. 235 (Summer, 1979), pp. 27-30, http://www.jstor.org/stable/1356553 ]

Graffiti was, and is, a way for the average person to express sentiments as simple as “I was here” to critiques of government. Modern graffiti is not very different.  American World War II soldiers spread “Kilroy was here” around the globe, while British soldiers doodled their version, “Chad”, and Australians had “Foo”.  In the 1960s, graffiti took off in most major cities as a form of political expression and New York subways cars of the ‘70s were literally covered in names, words and drawings.  Walls became canvases for asserting your dominance and claiming turf.  The ’80 gave rise to American hip-hop, with teenagers around the world becoming obsessed with NYC street culture.  Art Galleries began to take notice of graffiti, with galleries like Fun Gallery in New York legitimizing graffiti as an art rather than vandalism.  (@149st, http://www.at149st.com/hpart1.html)

The infamous “Kilroy was here” graffiti on a piece of the Berlin Wall located in the Newseum in Washington, D.C., USA.

In the early 2000s graffiti became mainstream, adopting the name “street art.”  Shepard Fairey earned household-name status with his Obama posters while Banksy became a celebrity while managing to stay anonymous.  Museums like MoMA and LACMA have contemporary graffiti in their collections. (“Graffiti in its Own Words” ) Despite success in the art world, there are still thousands of people arrested and tried for graffiti every year, usually having been caught spray painting a wall with the same type of words and images that help us learn about ancient cultures.  Though techniques have gone from scraping into stone to printing and posting elaborate images, graffiti remains as a strong reminder of our collective need to leave a mark and gives us a way to better understand a culture and its people. 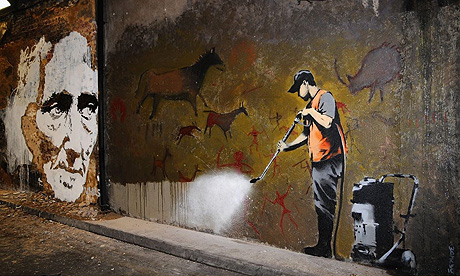